Although we are medical professionals, both Gary and I show keen interest in Nature and we regularly visited parks and gardens in Hong Kong as amateur nature photographers.

This “Mystical Garden” project that we jointly developed is an attempt to chronicle the exotic, the rare, the unbelievable, the ephemeral, the secretive and the aesthetically stimulating side of nature not readily visible to the naked eyes. We employed sophisticated technologies including macro- and high speed photography, macro X-ray radiography, CT scanning, micro-CT scanning and software manipulation such as photo collage and advance 3D visualization of digital imaging data. In addition, we incorporate virtual reality cinematic display and stereoscopic display as means of delivery of our visual information. As a project that engages the intersection of art & science, we try to bring out the aesthetic elements and the beauty bestowed in Nature yet embracing the scientific nature of its content. Majority of the subjects are taken in gardens and parks commonly found in Hong Kong.

This portal opens the door to a most exciting and unbelievable visual journey which we hope to share with you. 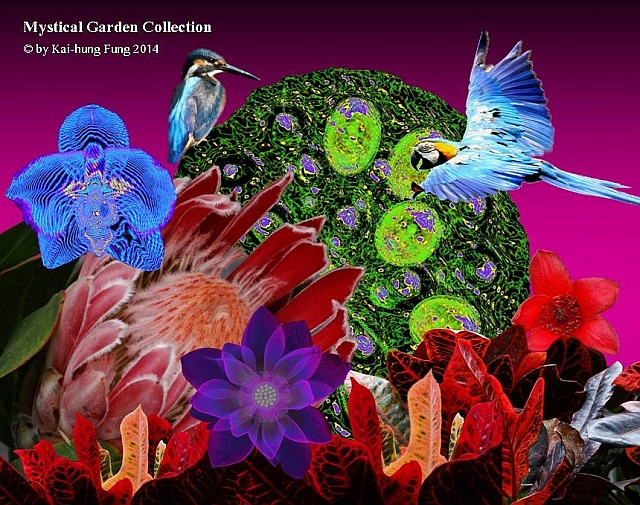 Dr. Kai-hung Fung is well known internationally as an artist working at the intersection of art & science who turns digital medical imaging data into fine art using his self developed 3D visualization algorithm. Dr. Fung pioneers the “Rainbow Technique”, a new color art concept to represent 3D objects. He also pioneers color 3D & 4D Moiré art, as an extension of his “Rainbow Technique”. Both these innovative art concepts have been published in LEONARDO, the official journal of the International Society for the Arts, Sciences & Technology, in 2006 and 2010 respectively. Dr. Fung is also a stereoscopic digital artist. He has launched stereoscopic exhibitions of his artworks in the Hong Kong Museum of Art, the Hong Kong Museum of Medical Sciences and the Strathmore Art Museum in 2008, 2011 and 2014 respectively.