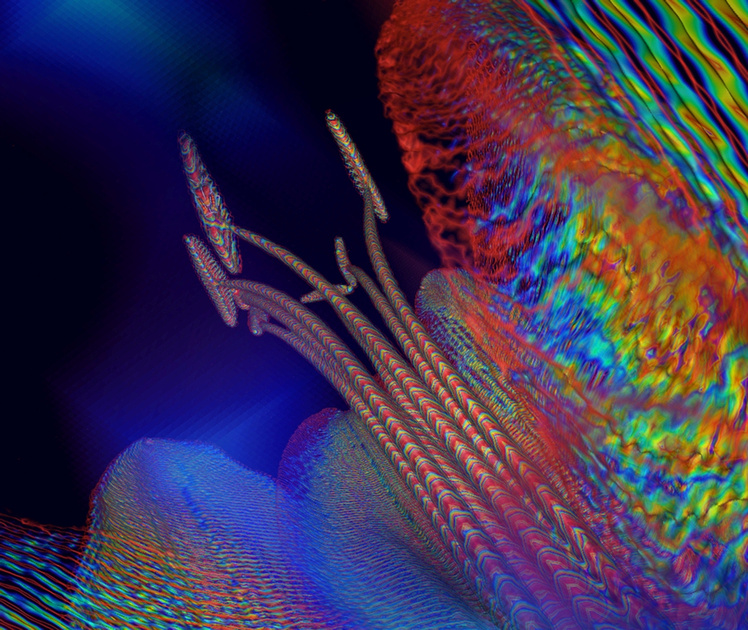 Colourful leaves (koyo) are to the Japanese autumn as cherry blossom are in Spring.  We timed our visit to Tokyo just to see the peak of the colourful display by the Gingko trees and Japanese maple trees.  We arrived at our hotel at 3:30 pm and quickly dumped our bags and headed out to Gingko Avenue (Ichicho Namiki) for the last 30 minutes of sunlight. We visited this Avenue several times as we stayed close by.  The street was always full of people coming out to enjoy the wonderful display of yellow leaves.  We saw a man carrying 2 exquisitely dressed anime dolls and carefully placing them amongst the leaves and photographing them.  Dog owners brought their pets, car lovers brought their vintage cars and bikers brought their Harley Davidsons to this Avenue to photograph them with the golden leaves. 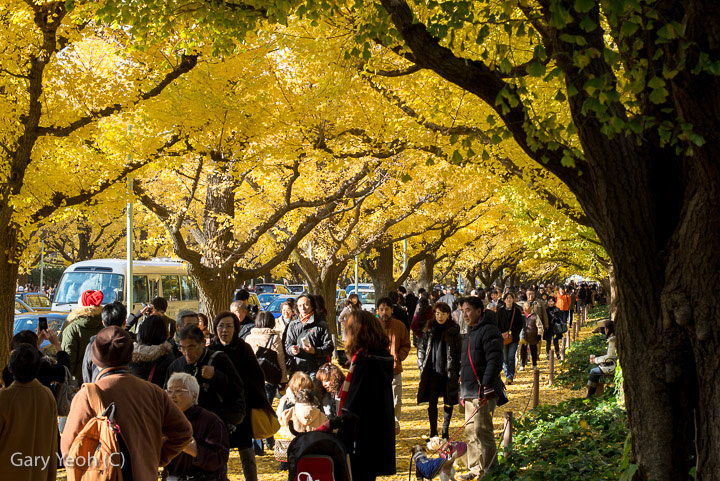 On the second day in the late afternoon when the sun peeked out for a short period.  It looked like every man, woman and their dog was out in force walking on the yellow carpet and the Avenue was very clogged with traffic.  In Tokyo, you seldom see anyone jay walking at the pedestrian crossing but perhaps because of autumn leaves, there were even lots of people standing in the middle of this 4 lane road taking pictures. 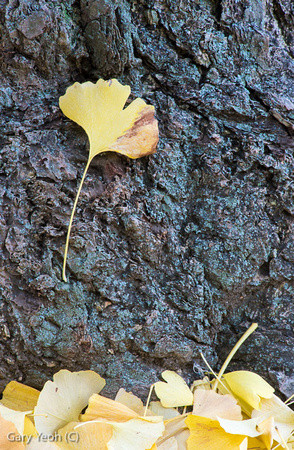 Even in this crowded avenue, there are many photogenic opportunities like this browning leaf hanging on the trunk before it joined the rest on the floor.  I like the simplicity of this image and the contrast between the smooth waxy surface of the leaf and the deep corrugation of the dark bark.  The brown discolouration on the leaf makes it special.  Nature has a way of expressing beauty even in senescent.  OLD can be BEAUTIFUL!

There are many parks in Tokyo where one can enjoy koyo.  During our trip we visited Shinjuku Gyoen, Koshikawa Korakuen, Imperial East Garden, Rikugen and Hama Rikyu.  Our favourite garden was Shinjuku Gyoen which we visited 3 times on different days and in different lighting conditions. 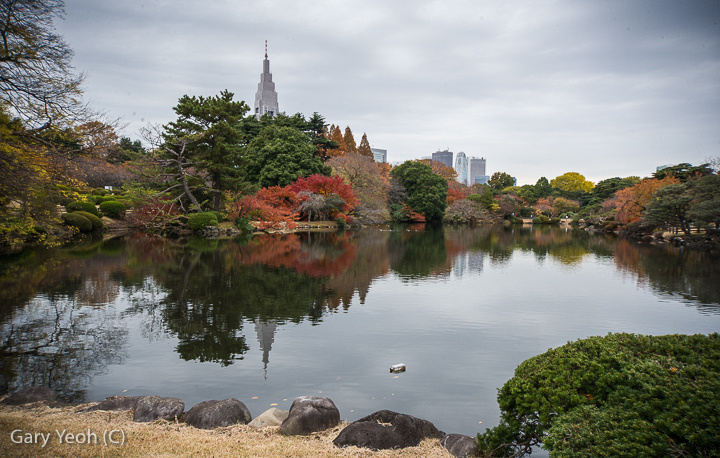 Japanese people are sticklers for rules.  For example, you never see anyone talking on the phone on the subway and there is NO litter on the streets even though there are hardly any bins around.  That is why I like the bottle which has been careless tossed into the pond in this picture! Sorry for digressed.  This is the main pond showing the changing colour in the various trees.  The tall building in the background Shinjuku tower and the Cocoon tower. As you can see, the sky was heavy with cloud which is pretty much the norm for the short period we were there - so no magic hour lighting. 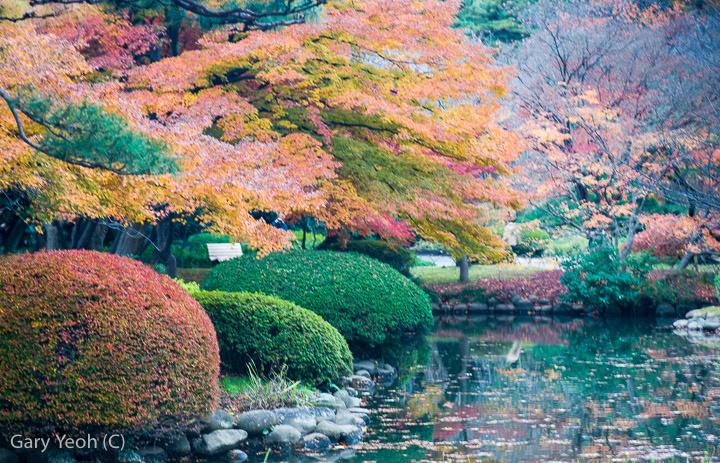 There are several ponds in the park.  This is a closer view of the water edge.  There was hardly anyone in the park on this day because the temperature was 2 deg Celsius and felt like 0.  Still it was pleasant to sit on that bench and take in all the colour.  I was experimenting with double exposure to give the image a softer look. I suspect the softness would not find favour with too many viewers. 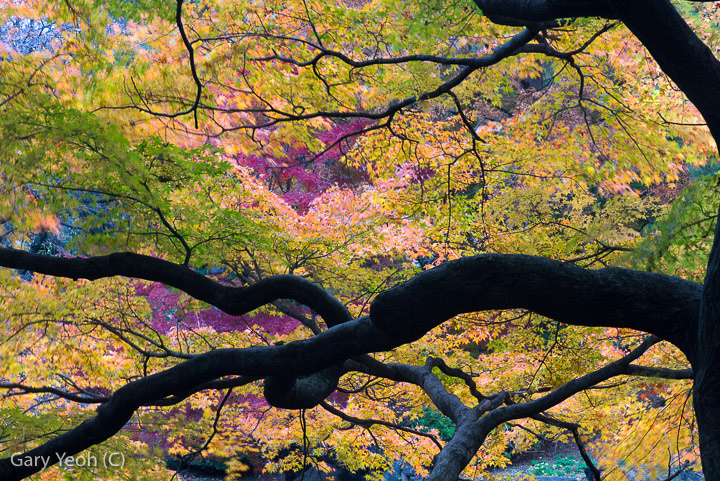 Getting under the tree was just magical!  The leaves were lit by the sunshine making the colour even more vibrant.  The silhouette of the winding trunk and branches gives contrast to the light display. There was a light breeze making the leaves blur and adding movement to the image. 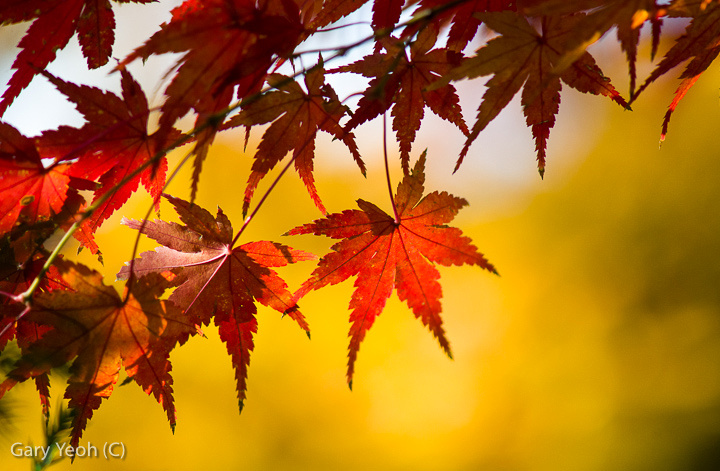 Getting even closer.  I like the shadow play on the leaves.  The yellow in the background is from the Gingko trees scattered throughout the park.  A particular majestic Gingko tree is seen just near the newly opened greenhouse. 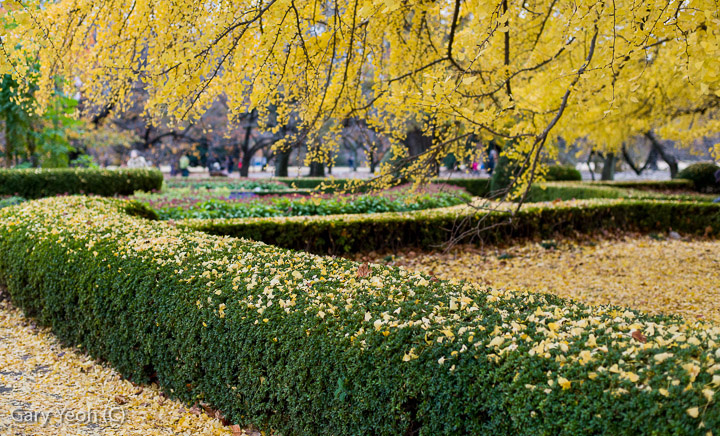 This particular tree still had lots of leaves even though the ground is already covered by leaves.  I saw children picking up the leaves and tossing them over their heads. The trees in the distance are cherry trees which have shed most of their leaves.  This park is a favourite picnic spot during the cherry blossom season.

Although the aerial display of colour is impressive and attracted most of the attention, don't forget to look on the ground.  Passing by a footbridge over a stream, I saw this tranquil miniature zen arrangement. 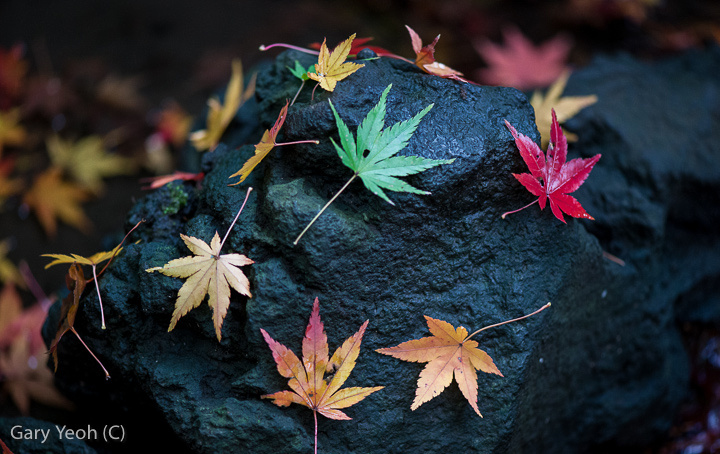 I took my time taking this picture, a perfect scene for practising slow photography.  Taken with 105mm macro lens with polariser, tripod, mirror lock up and remote shutter opened for 10 sec.  The black rock provides just the right stage for this colour leaves.  I also like the contrast of the texture of the leaves and the rock. The leaves in the background are floating in moving water. 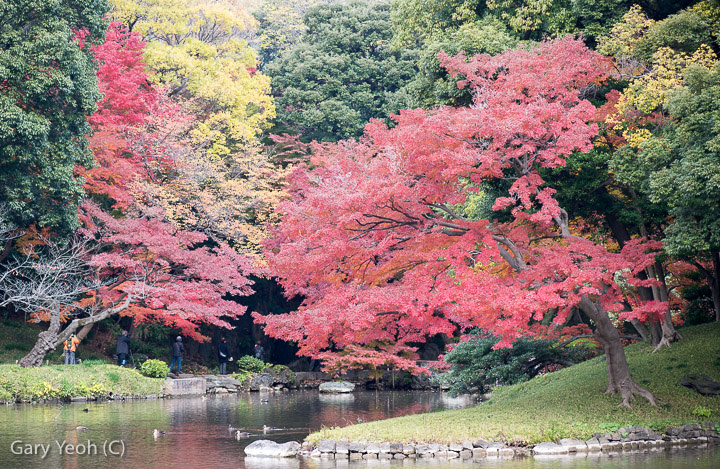 This is a traditional Japanese garden section with lots of Japanese maples and water features.  Like the two legged visitors, the ducks are also enjoying this park. 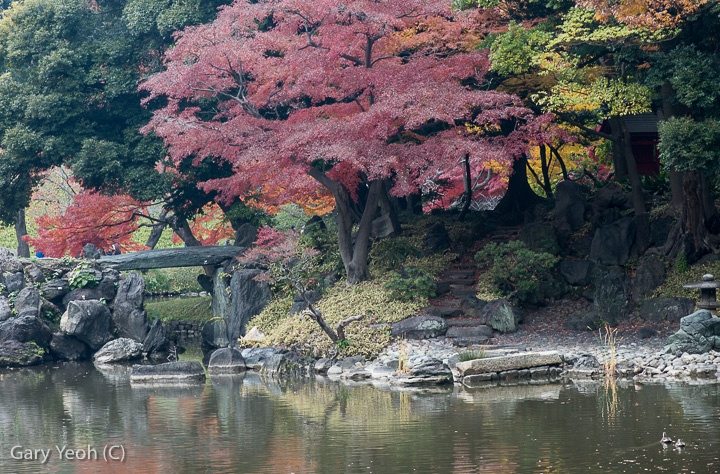 Opportunity like the above are rare when there is no visitor visible (except for the two ducks). Traditional features such as rock footbridge, rock lantern and winding footpath makes for a soothing stroll through this park.  Before you dive into contemplative solitude by placing yourself in the scene, there are actually 2 persons behind the central rock. 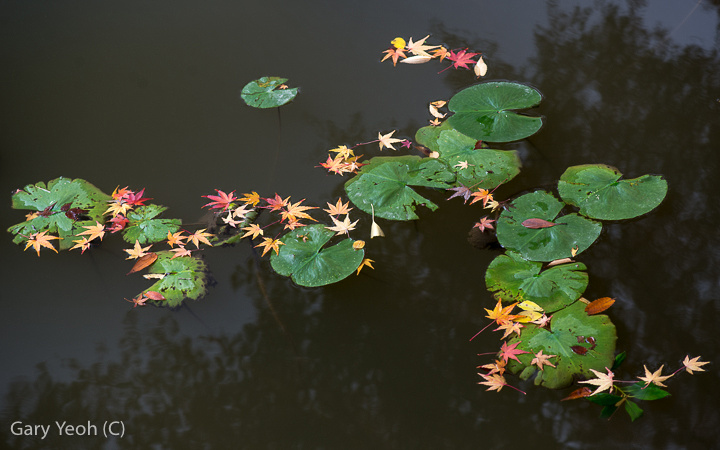 Maple leaves and lily pads. The colour here is enhanced with the use of a polariser. Can you spot the Gingko leaf?

Koishikawa Korakuen (小石川後楽園, Koishikawa Kōrakuen) is one of Tokyo's oldest and best Japanese gardens. It was built in the early Edo Period (1600-1867) at the Tokyo residence of the Mito branch of the ruling Tokugawa family.  The garden was named Korakuen after a poem encouraging a ruler to enjoy pleasure only after achieving happiness for his people. Koishikawa is the district in which the garden is located in (source - Japan-guide.com). This is one of the 7 such places appointed as the Special Place of scenic beauty and the Special Historic Site based on the Cultural Properties Protection Law of Japan. The only other place in Tokyo protected by this law is Hama Rikyuu which we also visited. 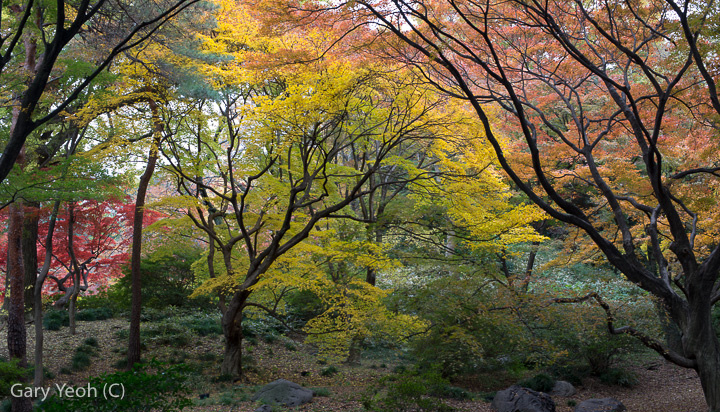 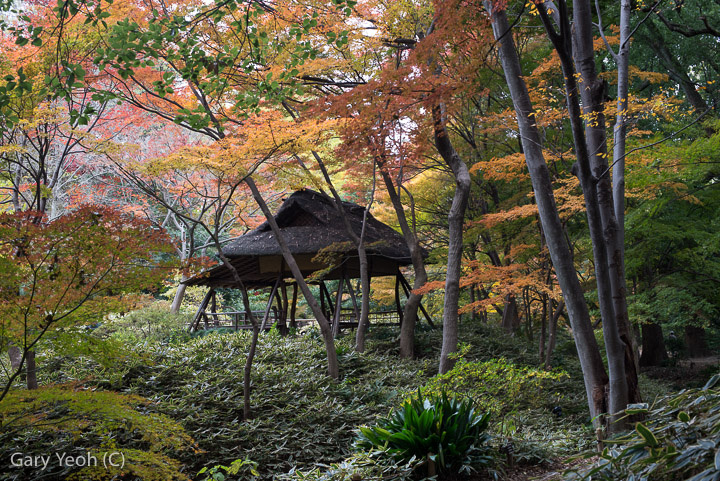 We used up all the memory cards we brought along and all in all we have taken over 1000 pictures.  These are some of the images from 2 of the gardens.  More images from the other gardens will be added in due course (part II to follow).

Dan Axioma(non-registered)
Terrific...! Gorgeous....thank you for sharing this beauty.
Sylvia Midgett(non-registered)
Excellent composition and georgoeus fall colours!
So serene without people in the shots. Enduring the cold has paid off. Your shots have definitely caught my imagination.
The polariser really did wonders! What camera body did you - full frame or AP-C?
No comments posted.
Loading...
Mission